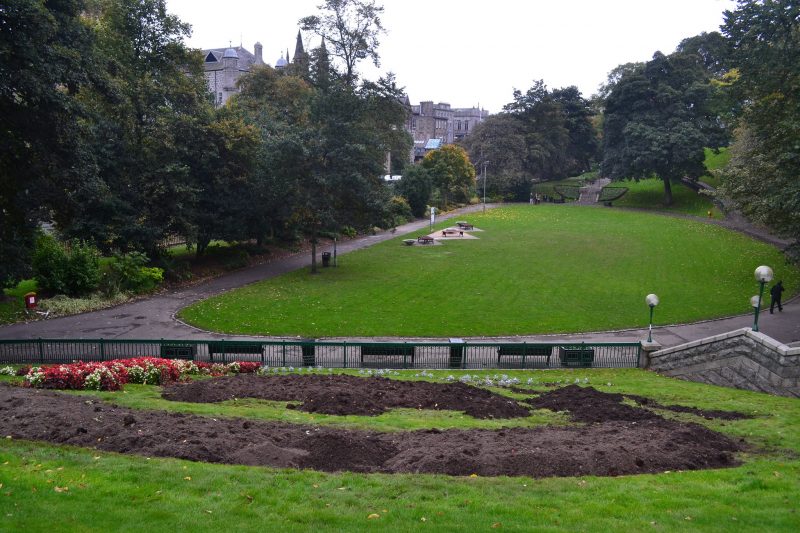 Ambitious plans have been laid for the £33M revamp of Union Terrace Garden in Aberdeen, with the council promising £17M towards the works.

The council has started that the work will include shops and gallery units to be built in the arches of the park and the construction of a bridge spanning the gardens from Blemont Street to Union Terrace. An amphitheatre will also be installed and the search is on for specialists to design this.

Last night, finance convener Willie Young confirmed there had already been private sector interest in the plans and council chiefs would be seeking more once the designs were drafted. He said: “I’m glad we have taken this step because, hopefully, it will mean people will realise these plans are actually going to happen.

“After procurement, we will be speaking with the private sector, and we have already had some interest.

“These plans, and especially the shops, could bring a lot of jobs and interest to the city centre.”

Dominic Fairley, chair of Aberdeen Civic Society, responded that he hoped planners would be “sympathetic” to the history of the famous sunken gardens.

He said: “We are happy to see something happening as long as the existing heritage is retained as much as possible.

“There is concern that something could be done to change the function of the gardens.

“I’m not particularly keen on the amphitheatre plan if it was just for private gain, but we would have to scrutinise it more before coming to an official position.”

Gary Craig, chief executive of Aberdeen Inspired, added: “It has always been our hope for Union Terrace Gardens to be further utilised as a civic space.

“Plans are at an early stage, but we are looking forward to working with and supporting the council as we work towards improving and revitalising the city centre.”

He said: “I think it’s welcome we are finally seeing some action taken on this.

“The masterplan proposal was one I have supported and continue to do, so I welcome this progress and hope the momentum continues.”

North-east MSP, Ross Thomson, echoed that view in stating: “After all the years of controversy over this historic Victorian park in the heart of the city centre, I’m sure the majority of residents will be very pleased to hear that progress is being made on redevelopment plans.”

Russell Borthwick, chief executive at Aberdeen and Grampian Chamber of Commerce, said: “While it’s important the people of Aberdeen have a chance to help shape and buy into the vision, we would also say the clock is ticking.

“Aberdeen’s city centre masterplan heralds the vision that will help write the next chapter in Aberdeen’s success story.

Union Terrace Gardens has been at the centre of controversy since 2008 when north-east entrepreneur Sir Ian Wood pledged £50million to create a new, raised civic space.

Opponents fought the plans and formed the Friends of Union Terrace Gardens campaign group, which continues to work to improve the area.

The City Gardens Project was abandoned in 2012, despite winning the backing of 52% of the public in a referendum, after the council and its newly elected Labour-led administration supported an alternative proposal to regenerate the area.

Here at Annedd Gardens we talk about Gardening, Landscaping, orangeries and extensions. Pretty much everything that you would need to know about your garden, we discuss it!

We will post information about our own and other people's experiences, the do's and don'ts of gardening and what you can do to make sure you're making the most of your garden. We will also link to relevant websites for your convenience.

Visit our Facebook for more information about who we are!

A bit about us

Collectively we have over 20 years experience in this area. We have worked on many projects that range from completely re-developing client's gardens to include outdoor living rooms, orangeries and extensions, to landscaping the garden and designing it to look better.

We have a deep passion for garden rooms which are independent buildings that serve a purpose such as an outdoor living room or an outdoor office. We think that these make a garden more exciting, more enjoyable and, often, add a wow factor to your home.